The CDC owns EBOLA!?! Can you believe this? 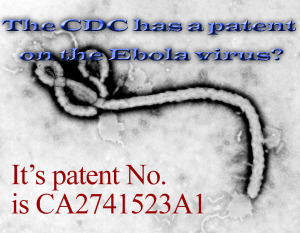 There is a lot of stuff going on in main stream media about this Ebola stuff, and I have to say is it shocking, “yes” to say the least. Do you see what half of this stuff says? I think people are getting too carried away, how about you? What are the facts? Here is one below click the link and check this out, I can make up what I am reading…

Did you know that the CDC has a patent on the Ebola virus?  That’s right.  The US government owns it.  As reported on NaturalNews, The U.S. Centers for Disease Control owns a patent on a particular strain of Ebolaknown as “EboBun.” It’s patent No. is CA2741523A1 and it was awarded in 2010. You can view it here

I am sure you many hear this Bull@hit and realize that it is all made to instill fear upon most readers expecting them to walk through life fearful of everything. This is what our world has brought us too. We are a bunch of slaves to the hype. So even if this was a panic button for all of us to receive vaccines, now what? We all as some sort of new source release that the government is projecting all of this panic that the government does this purposely and we have to let the people know instilling more fear onto the public. It is really unsettling to say the least… I am actually getting tired of this BS on Social Media as well…. Here are some more facts…

OK… Now that all of that mumbo jumbo has been stated, here is what you need to know… Ebola is not taking over Texas. The CDC are the owners of a strand of Ebola Virus and they are also the ones in control of the people that are coming over here from overseas. The news picks it up and everyone want to talk about it instilling more fear into the public. Musician and ex-boyfriend to Rihanna, Chris Brown stated in a Tweet on Twitter that

I don’t know… I think this Ebola epidemic is a form of population control. Shit is getting crazy bruh…

This video Above featured by a well renowned video blogger discusses the hype in it’s true form, hype. This is made to instill fear to keep us from seeing that we have full control over what’s important ourselves.

Does a man’s biological clock tick? If you’re under 30 don’t read this...